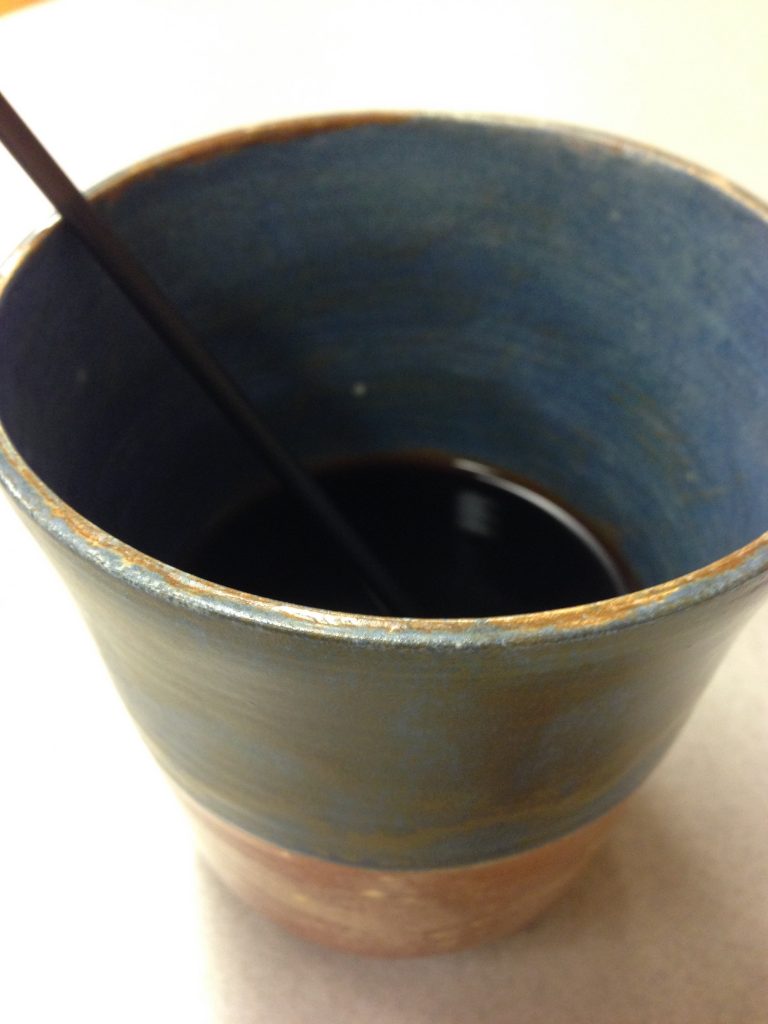 Well, I had the most fortunate opportunity to have Tom Steiner make me a French Press coffee. I have to admit I was familiar with the French Press but I really never wanted to take the time to buy one and try it out. It just seemed like more equipment to store. Tom and his wife owned and operated the Blue Bottle Coffee Shop in Muncie Indiana. They eventually sold the business but at one time the location was in the village of the Ball State University campus from 2001 to 2004 and eventually downtown Muncie. His shop was one of a few local coffee shops in the area.

Tom is currently a business coach and has an office down the hall from me. He enlightened me one morning in the breakroom about French Press coffee. “The coffee texture is ground finer than regular coffee but not like an espresso.” He compared the different grinds of the Folgers we have in the break-room vs. his coffee he brought for the press. He explained that there would be a smoother taste with the French Press (he was right!) After a few minutes I realized I had very little knowledge of coffee. He continued to tell me the various types/styles of coffee makers. At this point I’m completely amazed at what I didn’t know about coffee…I mean how much is there to know right?

Tom’s brand of coffee for today… 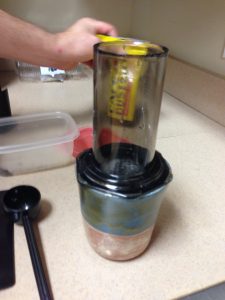 The base of the Aeropress over the cup. 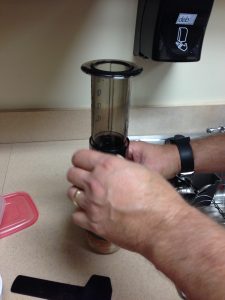 Inserting filter and top portion of the Aeropress. 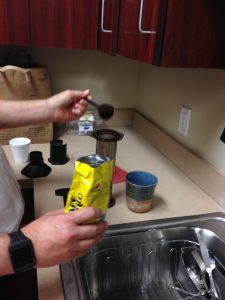 Adding the coffee to the Aeropress.. 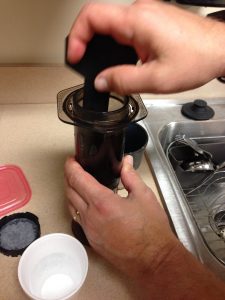 Stirring the coffee and water to release flavor.

Pressing the coffee through..

So, he agreed to discuss coffee with me and I sat down a week later and interviewed Tom after my first encounter in the breakroom.  He made me an Aeropress coffee this time instead of a French Press coffee. (This gets better and better! ) He asked me, “How caffeinated do you want to get?” He explained that he hasn’t perfected his technique yet. The Aeropress is designed to be used instead of an espresso maker. It’s not quite the same but does a pretty good job. I explained that I use a Keurig to which he replied, “yeah, I want you to get rid of that.” His reason is simple. The water in those machines is forced through so quickly that it doesn’t have time to really pick up the coffee flavor. It’s basically a hot water warmer. As I’m trying my very own personally made espresso I notice the smooth but strong flavor. It’s supposed to have a rich body. I thought it was very good but he believes he doesn’t get the consistency right. “They don’t taste the same each time I make them. It could be the steeping time or the grind.”

So what’s the difference between the French Press verse Aeropress?

The different styles of coffee that the French Press and Aeropress produce is down to the different brewing and filtration methods used. The French Press requires a coarse grind (but Tom likes a finer grind) and a long steeping time (4 minutes is what he prefers) , whereas the Aeropress uses a fast pressurized extraction using finely ground beans. The Aeropress makes a small serving of espresso style coffee, whereas the French Press gives a full bodied, rich and strong coffee.  I did a little research and the Aeropress was invented in 2005 so is a new product compared to some other coffee makers. There is actually a very good article on the different between the two at http://www.wecravecoffee.com/aeropress-vs-french-press

After speaking with Tom I realized there is more science to coffee making than most non-coffee connoisseurs realize. He takes coffee making to an art form. I asked him what he thought the problems were with the coffee shops today. He gave me 3 main issues:

Tom explained that water is very important in the coffee making process. Water should be filtered especially for a drip brewed coffee. And if you use an espresso machine you need soft water. The minerals will clog the machine because the tubes in an espresso maker are smaller but it also changes the flavor of the coffee. He also points out that coffee made here verse Chicago will taste different because of the water. Filtered Water – taking the chlorine and other minerals out will leave room for more coffee flavor. The grind of the coffee is also important. The finer the grind the more coffee flavor you will extract. Espresso is a very fine grind and stronger because of this. Residue on your coffee maker will affect the flavor. He states that everything needs to be very clean, even the coffee cup. I need to point out that the Aeropress coffee he made me this morning was placed in a handmade coffee cup because he refused to use the styrofoam that was in the breakroom. 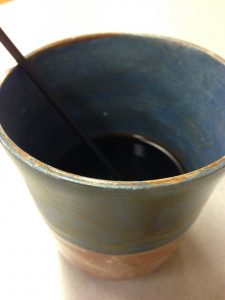 Tom doesn’t sell coffee anymore but he does write business coaching articles for the ISBDC.org and I found one called Living the Coffee Shop Dream http://www.isbdc.org/living-the-coffee-shop-dream

When we ended our conversation Tom pointed out….”When my wife and I get up in the morning it’s not…do you want coffee? It’s what type of coffee do you want?” On that note I asked if we could discuss this in a further interview. I’m betting I might get another cup of great coffee out of this!!